Freight (G) - $20.00
Signature is required on Delivery. If you are located outside Sydney, Melbourne or Brisbane Metro areas our customer Service can contact you if your order incurs additional freight charges due to location or oversized items (See conditions)

StudioLive AR12 USB StudioLive® AR12 USB 14-channel hybrid mixer connections and controls required for a number of music applications Record Multitrack as in the studio, Mix for rehearsal Playback for Karaoke via USB or BLUETOOTH This product now includes Studio Magic. This is a collection of plug-ins that gives an extended benifit in sonic functionality to any DAW, including Studio One. These have benn chosen from the from the leading names in virtual instruments and effects, with each selection chosen for its application and enhancement it can give to your compositions and songs

Each of the two mono channels and two stereo channels includes level control; a microphone input with one of PreSonus’ prized Class A preamps; three-band EQ; and more. Besides the main outputs, you get a monitor mix output with a dedicate bus for feeding a stage wedge, headphone amp, or in-ear system. The other bonus is that the StudioLive AR8 USB is also a studio mixer, you also get control-room outputs with level control to feed your studio monitors.two applications already for this mixer

Most mixers make you route acoustic and electric guitars and basses through external direct boxes before connecting to a mixer input. But with StudioLive AR mixers, Channels 1 and 2 have high-impedance instrument inputs, so you can plug a guitar or electric bass straight into the board—no direct box needed.

There is a unique Super Channel (stereo Channel 7/8) allows you to connect four stereo analog and digital sources at once, enabling you to use the mixer with your high-tech devices. Plug a media player into the Super Channel’s unbalanced RCA and 1/8-inch stereo inputs, play stereo audio from the onboard SD™ RECORDER  or from your USB-connected Mac® or Windows® PC.

This Mixer has a first in that is has  BLUETOOTH WIRELESS  4.1 to pair your phone to your StudioLive AR mixer and instantly have wireless access to your music library for break music, backing tracks, or ear-training. Have a song you want the rest of the band to learn? Pair your phone and start rehearsing!.Great for KARAOKE or ONE MAN BAND

THe Presonus AR12 USB Mixer can also record in a few ways whether is for personal or in rehearsal situation. So StudioLive AR mixers offer two different ways to record. Connect a StudioLive AR12 USB mixer to your computer via USB 2.0, and you have an 8x4 multitrack digital recorder, ready to capture ALL input channels plus the main mix to a Mac or Windows PC with professional, 24-bit/96 kHz quality. The INBUILT  stereo SD RECORDER allows you to record the main mix without a computer—A simple push of a button called Record and go. Recording can’t get much easier than this!

Both the integrated USB recording interface and the SD recorder have multiple uses beyond simply recording. With just a few backing tracks, your small band can sound like a much larger act, so we enabled the USB interface to play back two stereo streams through the mixer—great for backing tracks, click tracks, or program music. Use the SD recorder to play up to 32 GB of MP3 and .WAV files for hours of program music or backing tracks without needing a computer. And don’t forget the Bluetooth feature in the Super Channel, which lets you play break music straight from your smartphone. With several ways to get the job done, you can work the way you want to.

The StudioLive AR12 USB has you covered for post production or pre production inciting an internal stereo effects processor with 16 presets, including an assortment of room, hall, and plate reverbs; chorus and delay effects; even a preset that emulates an acoustically treated studio room to provide a warmer, more intimate tone. A dedicated effects return, complete with master level fader and dedicated monitor send, lets you adjust the amount of the effects in your main and monitor mixes. You can even bypass the effects with a footswitch (optional). It’s just another way that StudioLive AR mixers enable you to build professional-quality mixes and recordings quickly and easily.

its a small compact and well built mixer and the StudioLive AR8 USB is an easy-to-use, all-in-one solution for audio mixing and recording. With a wide variety of connections, two ways to record, and a simple, elegant mixing surface, it will quickly become the heart of your live and studio sound systems. 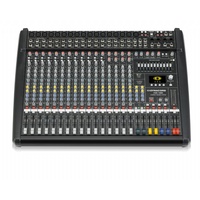