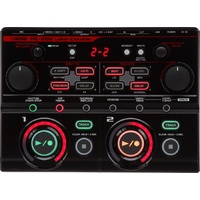 The RC-202 Loop Station offers 2 stereo loops along with designated fingertip controls and animated status indicators. You can store and recall up to 64 live loop creations on the phrase memories, which are organised into 8 different banks to allow easier access while performing. These loops work in a save-as-you-go fashion so you can save loops without interupting your playing.

It is equipped with powerful multi-effect capabilities such as the 4-input and 4-track FX which are available simultaneously, as well as numerous effects ready on fingertap for loop creation and playback. You can enhance sound while you record with Input FX which features P. Shift, Lo-Fi, Ring Mod, and more. Track FX features options like Beat, Filter, Slicer and more. These effects are easily adjusted with large and smooth knobs, and can be turned on or off with dedicated panel buttons.

The RC-202’s panel is filled with hands-on buttons and knobs for maximum creative control while looping. There’s also a jack for connecting up to two footswitches or an expression pedal. Via MIDI, extensive control is possible from a MIDI foot controller or keyboard. MIDI also allows for synchronization with an RC-505 or a second RC-202, as well as drum machines and other devices.

The RC-202 is outfitted with an XLR mic input, mono/stereo instrument inputs, and a stereo aux input. All inputs can be used at once, letting you capture and mix multiple audio sources as you build loops. It’s also possible to send a click track to headphones only, a great feature for monitoring while performing. Via USB, you can plug into your computer to archive WAV loops or load up RC-202 phrases with live backing tracks or sounds for sampler-style triggering. The RC-202 also functions as a USB audio/MIDI interface, making it easy integrate with music software for stage performing with a laptop, audio recording, MIDI sync, and more.