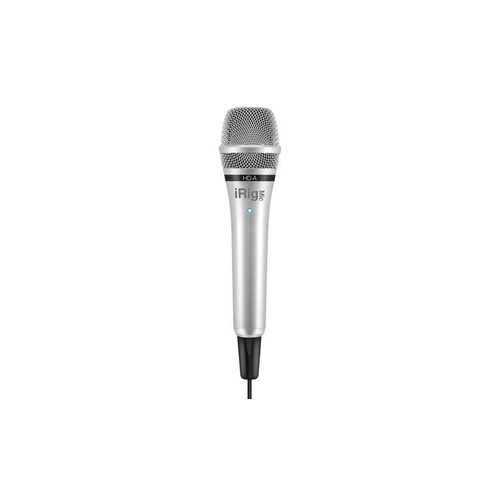 Introducing the iRig Mic HD, the first affordable high quality hand held digital condenser microphones for singers, podcasts, , home studio enthusiasts and anyone else who wants to or needs to record in high definition Introducing the iRig Mic HD, the first affordable high quality hand held digital condenser microphones for singers, podcasts, online broadcasters, journalists, videographers, home studio enthusiasts and anyone else who wants to or needs to record high definitions digital audio on the go. And its easy to use as you can connect it directly to your iPhone, iPad,iPod touch or your Mac/ PC. Now thats convenient.

Versatility is only one of iRig Mic HD's many aspects.iRig Mic HD sports a 24-bit audiophile-grade A/D converter, a 44.1/48 kHz sampling rate and a low-noise/high-definition pre-amp, so you know you can count on iRig Mic HD to give you professional quality results anytime, anywhere. Its able to handle the most demending professional needs in the field or in the studioand is equal in quality to what you'd need from a microphone that costs three times as much or more.

The highly popular iRig Mic's successor, and the iRig Mic HD's successor is the feature of a sturdy metal body construction and an ergonomic handheld form factor that allows you hours of comfortable recording and performance. It also has the ability to be mounted on a standard microphone stand using the included clip. Now thats versatile.

And because you want to look good while you're recording  and performing, the iRig Mic HD comes in two eye catching and sophisticated colours: black or silver.

And hows this for a good deal, you'll be able to record right out of the box thanks to the considerable assortments of free apps annd software- the largest collention included with any portable microphone. You get pristine vocal processors, tools for field recording, guitar and bass effects and a whole lot more.

Sure you can go look for another mic thinking its good enough, but none can match the impressive combination of high definition sound, multiplatform compatability, versatility and an incredible price that you can get with iRig Mic HD.