The  Focusrite Clarett Audio interfaces utilise superfast and responsive Thunderbolt interface, not USB connectivity. Recording with plug-ins in real time, such as  Guitar amp simulators and classic vocal microphone signal chains - with the addition of enriching this with inline reverb, EQ, compression and tape saturation – can be all be easily added, with latency so imperceptible as to make no difference

The Focusrite Clarett also steps up with the quality of the preamps with the addition of the ‘Air’ function ( 4dB boost starting from around 100Hz due to an impedance input change, reaching +4dB around 10kHz,) allowing to make your vocals sound rich and pristine. To further justify the cost, the Time & Tone software plug-in bundle is a fantastic bonus package. In addition to Focusrite’s own Red2 (EQ) and Red3 (compressor) signal processors, the addition of four excellent plug-ins from widely admired Swedish developers Softube (the TSAR-1R reverb, Tube Delay, the Drawmer S73 master bus processor and Saturation Knob) makes for a very decent package. 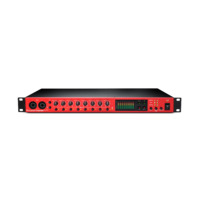