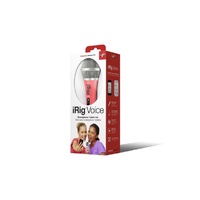 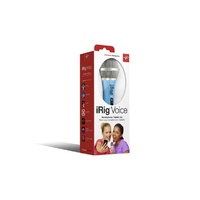 The iRig Mic Cast is about the size of a large coin making it great for on the go use as it is easily portable and can fit in your pocket, briefcase or computer bag for easy transport. Its small size makes it great to use anywhere, anytime.

This pocket sized voice recording microphone with supreme clear audio quality is small enough to fit into your pocket making it easy for on the go use. it features a tight unidirectional pickup pattern that is useful for the fact that it minimizes background noise, making it ideal for single-source audio recording.

The iRig MIC Cast is also reat for business applications such as recording meetings and enhanceing the audio quality of conference calls thanks to its unidirectional pick up pattern.

One of the biggest problems with portable mics is the difficulty with getting great clear recordings when you aren't close to the device or the device isn't close enough to you. This can be very frustrating at times. But with the iRig MIC Cast this problem is easily solved with a duel gain switch that allows the capture of up close audio as well as audio from sources that are further away.

The iRig MIC Cast is compatable with all iOS devices with a headphone/audio in TRRS jack, like iPhones, iPod touch and iPads. Even though its a recording device the iRig MIC Cast is also useful as a hands free calling microphone for conference calls and speaker phone applications. And you can also rotate the iRig MIC Cast to get the best capture angle, increasing the quality and fidelity of you recordings.

Plus an even bigger bonus is that there is no need for any additions. Its as simple as plugging the iRig MIC Cast into the headphone out "TRRS" jack and your ready to record.

The iRig MIC Cast also comes with two apps for recording and sound processing: iRig Recorder and Vocalive. iRig MIC Cast is as simple as opening an app on your iOS device to start making amazing recordings.

The iRig MIC Cast is proof that good things do come in small packages. With its incredibly flat frequency response with zero tonal coloration.